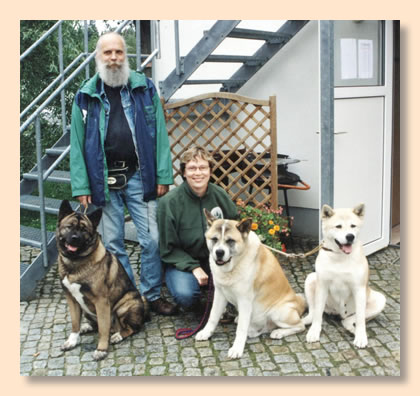 For us and our two children a dream came true in 1988 – a big house of our own anda nice garden. So we moved in the Upper Lusatia to a village whose name we have never heard before – Ohorn. Until this time dogs hadn’t been a topic for us, although our love for dogs already existed. But in a little apartment in a block of flats it would not have been possible to have a dog – at least not a big one.

At the beginning of the 90s we met an old friend again. He had moved to Saxony, too and with him we saw an Akita for the first time. More precisely there were 3 Akitas – one female and her two puppies. We immediately fell in love with this breed and wished to have an Akita of our own. When our friend got his B-litter in 1995 we were the first to choose one of the puppies. Bruno was our choice because we really liked his colour – red white pinto with a black mask. To be honest we didn’t know much about the attributes of Akitas at that time. But it was no problem at first, because Bruno was the loveliest and most pleasant dog we could imagine. Of course he sometimes had his famous Akita-bullhead but he hardly barked, was quiet in the house, loved walking and going by car and everyone admired him. 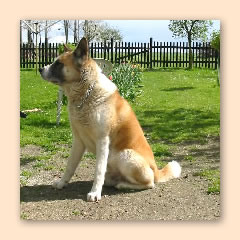 The older he grew the more he showed what it meant to be a big male Akita. There were problems with other male dogs near our house. Bruno wanted to start fights against other dominat dogs or dogs which were only yapping at him. That’s why we had to take him on the leash whenever we left our garden to avoid further trouble. Today we know how important it is to socialise Akita puppies as early as possible and bring them in contact with other dogs from the beginning on. Unfortunately we missed this opportunity with Bruno. That’s why we recommend each new owner of our puppies to attend a pet obedience school to give their dogs the chance to get experience with other dogs.

It didn’t take long after Bruno has become adult and we wished to have a female Akita.too. Not predominatly to breed but to have company for Bruno when we were at work/school. At that time we had good contact with a breeder in Lower Saxony who bred the strong robust American Akita. She had bought a male Akita in the USA and was planning a litter with him. 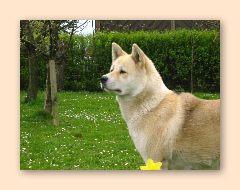 On 22nd October our Cheyenne was born. She was the only sesame sandy puppy (like her father). All her siblings were black with white markings. As we wanted to have a light-coloured female we immediately chose her. After 8 weeks we could finally bring her home. From the beginning on she was extraordinary – so affectionate and cuddly. On the first day Bruno acted reserved but on the second day the ice was broken. Chey settled in our family very fast. Till this day she has been our sunshine. Since 2001 we have taken her to the pet obedience school. She gets along with other dogs there and usually does what she is supposed to do. Actually she does everything for a tasty reward. We have to be careful that she doesn’t become too fat. Everytime after she has emptied her food bowl she is on the watch if there is anything left in the other one’s bowls. In general she is more obedient than Bruno and even if her hunting instinct appears we can make her stay with us and not run after the deer.

Bruno – born as an Akita Inu - has become to an American Akita (Great Japanese Dog) because of the changings in breed standard. 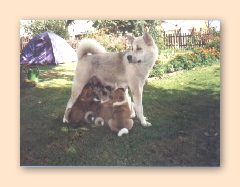 Later on we fancied having the unique experience of breeding Akita puppies. Our pair was in the best age now so we envisaged a breeding certificate, went to exhibitions with our dogs, let the hips x-rayed and registred our kennel’s name. There was enough time and place and so our pair fulfilled our desire on 9th July in 1999. However we were challenged from the beginning on – 10 little Akita puppies saw the light of day (7males, 3 females). We assisted our Chey and hand-fed the puppies several times a day. When the pups could finally eat solid food it didn’t get any easier. Now they have started walking and running and our garden wasn’t safe anymore. No flower was spared and the fence was no barrier to crawl through and go on an expedition. We were constantly counting if all 10 are still here the only quiet minutes we had when they were sleeping. Despite lots of strain these weeks were a wonderful time and each time it was so hard to say goodbye to our offspring. 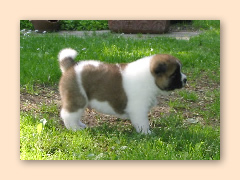 We are glad to have contact with some of our puppy’s buyers and we are delighted about each letter and picture that we get. It’s a fantastic experience to see a baby-sized Akita puppy growing to a dignified adult American Akita.

On 19th September 2000 our second litter saw the light of day. This time we got 8 American Akita pups (1 male, 7 females). To raise puppies was much easier this time. We had the experience of the first litter and Chey got more milk, which meant no additional milk bottles. Because winter was coming our puppies got a special room in our house. Fortunately there were some wonderful autumn days and the puppies could play in the garden a lot. The farewell was as hard as the first time. But as with the first litter we got some nice letters and e-mails and we have found new some friends who live near our village. 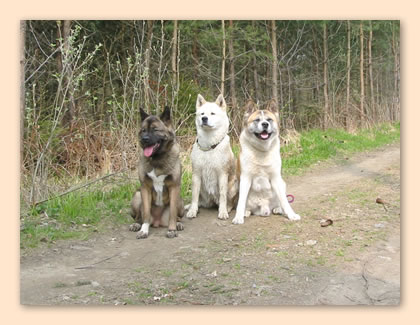 Our third litter was an only child - Chuck. We don’t know why but that’s nature. He was very heavy and strong and really enjoyed having his mother’s and our attention for his own.

Meanwhile we had our D-litter and E-litter as well. Both of them were as exciting, stressful, and gorgeous as the litters before. Now we have decided to stop breeding with Cheyenne. She should be old enough to be pensioned. She has always been such a wonderful mother. Hopefully she will live happily together with us many further years.
In August 2008 we had to say goodbye to our beloved Bruno. He died at the age of almost 13 years and it was incredibly sad to let him go. 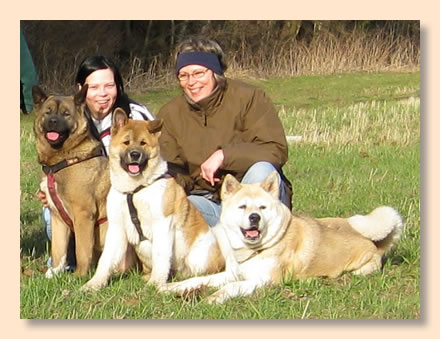 Because we didn't want to miss our hobby to breed American Akita puppies we continued with Jane. She has completed our Akita trio in 2004 and originally comes from the American kennel Arborlane Akitas. In the meantime she has passed all the important medical checkups (eyes, hips, knees, elbows, shoulders) and we got her breeding license. She already gave birth to gorgeous puppies. We are planning new American Akita puppies from Jane in 2011. This will be Jane's last litter.
Since December 2008 there has been a new male Akita in our house. Shadow comes from the Polish FCI -kennel Buckshot Akitas and he has excellent ancestors. As he matured according to our expectations we could use him for breeding since 2010. More information and pictures of our American Akitas you can find on their single pages.